A Dwelf is not only one of the smallest cats in the world, but also one of the most exotic, thanks to its amazing and unusual appearance. Dwelf is a rare breed of cats, characterized by short legs and bent ears

What can be common between fluffy American Curls, bald Canadian Sphynxes and short-legged Munchkins? Remember one thing – all three species of these cats became the ancestors of one of the most exotic and unusual breeds, which breeders named – Dwelf. 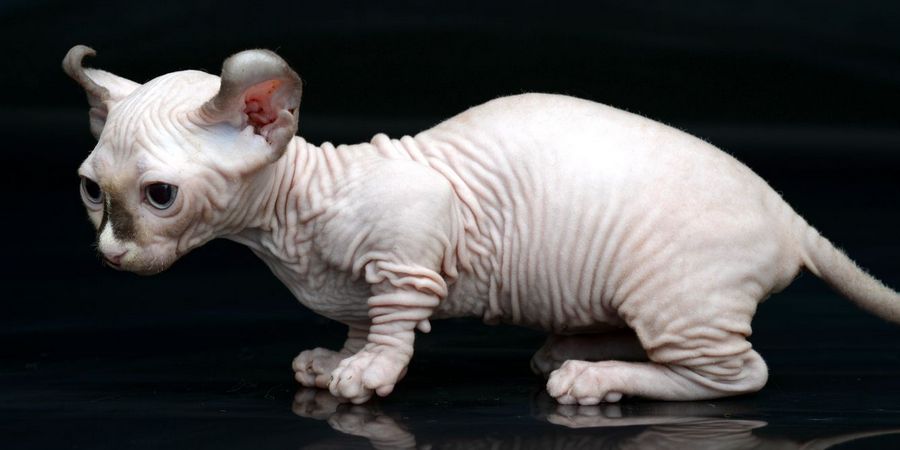 In 2007, a group of American breeders set a goal to create a completely new cat breed, so they decided to do an unprecedented experiment. Specialists crossed a Munchkin, American Curl and Canadian Sphynx, and the result was amazing. As a result of complex and painstaking breeding work, kittens were born with a miniature sized body, bald skin and funny ears that are bent back.
And although the Dwelf breed has been given experimental status, and while none of the cat organizations will recognize it at the moment, breeders are confident that their surprising pets will soon become among the most popular cats on both sides of the ocean.

Short limbs, with the hind legs slightly longer than the front, so that the cats look short. Adults in size look like normal-sized teenage kittens. But the breed has a muscular body, a massive neck, strong legs, and that is why they don’t look fragile.

The Dwelf’s ears are round and large, and they are curled. Their head is more long than broad, and the skull is rounded with protruding cheekbones and muzzle. Large, almond-shaped eyes, slightly tilted. Adults have expressive creases, especially on the shoulders, legs, and forehead.
The tail is long, thin, and pointed at the tip. There may be a slight fluff on the tail, and the tail resembles a whip.

A Dwelf doesn’t have any hair, but mild downy hair is possible throughout the body or in separate areas. There can be fluff covering the paws, tail, shoulders, nose, and ears. To the touch, the fluff resembles suede. It is important to mention that the whiskers and eyebrows are short or non-existent. Skin colour can be in any colour. The muzzle can be a more dark tone than the main skin colour.

Description of their appearance

The appearance of these creatures is as unusual and original as their name. Even in the photo, the Dwelf looks more like a fairy-tale character from children’s cartoons or a charming soft toy than a cat.

What is the difference between the Dwelf and their larger cousins, apart from their unusual appearance? The answer is obvious – nothing! These miniature creatures are as friendly, sociable and playful as the rest of the bald cats. Lovely and curious, they are always on the move, exploring every corner of the house. The small size of these animals is more likely an advantage than a drawback because they can even get into fairly narrow and inaccessible gaps. 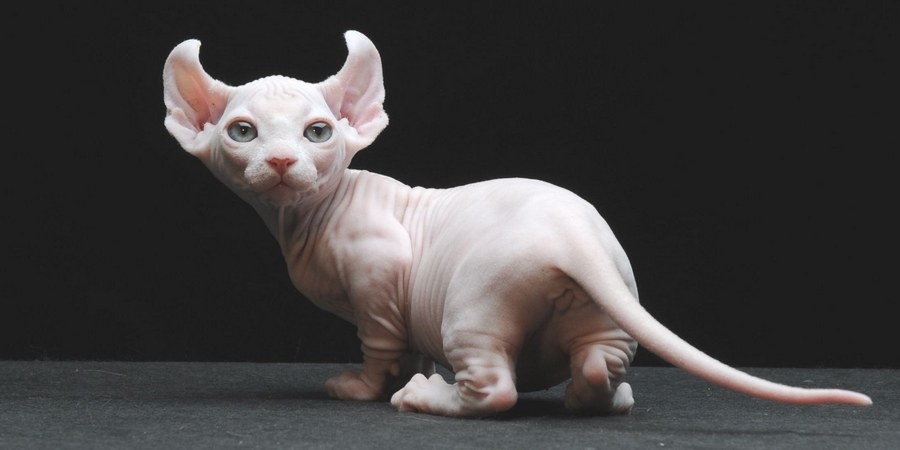 A Dwelf cat gets very attached to its owners and needs constant attention. The owner will have to spend a lot of time to communicate with his miniature pet; otherwise, he will get bored and depressed. These animals are quite vulnerable, and if they get offended, they can hide for a long time in a secluded corner, refusing to communicate with their owner.
These miniature cats will get along well with other pets and will also become wonderful pets for children, as they are not aggressive at all; on the contrary, they are very friendly, loving and affectionate.

Caring for such an exotic pet is simple, but there are still several features to know about them.

This cat breed is very young, and little is known about it. There is no accurate data about its health and its predisposition to genetic or hereditary diseases.

Experts recommend only a specially selected balanced food for these cats. The main condition is not to overfeed this cat, as they have a tendency to obesity.

Where to buy a Dwelf cat? Unfortunately, so far, they can only be bought in their homeland — North America. The price of a Dwelf is unknown, and the cost of a kitten of this breed can be obtained from breeders.
A Dwelf cat, resembling a character from a good fairy tale, needs attention and care, but in return, this amazing pet will give its owner much more and will become a faithful, affectionate and loving friend.

Canadian Sphynx is a hairless cat with abysmal eyes

Bambino cat: Description of the breed

Elf cat is a hairless cat with curled ears