The Canadian Sphynx is not only an unusual cat, but it is different. A mysterious creature that attracts attention, surprise, and makes you ask a lot of questions. The lack of fur on its soft skin and a deep, penetrating look won’t let anyone pass by without looking.
Surprisingly, sphinxes have several varieties of color and even a mustache. These mystical animals are loving, loyal friends to their owners, and require special care.
The Aztecs and South American Indians were the first to mention the appearance of the hairless cat. In the 1930s, cats of the hairless Mexican breed participated in American exhibitions. However, those feline species were not destined to live up to the present day. 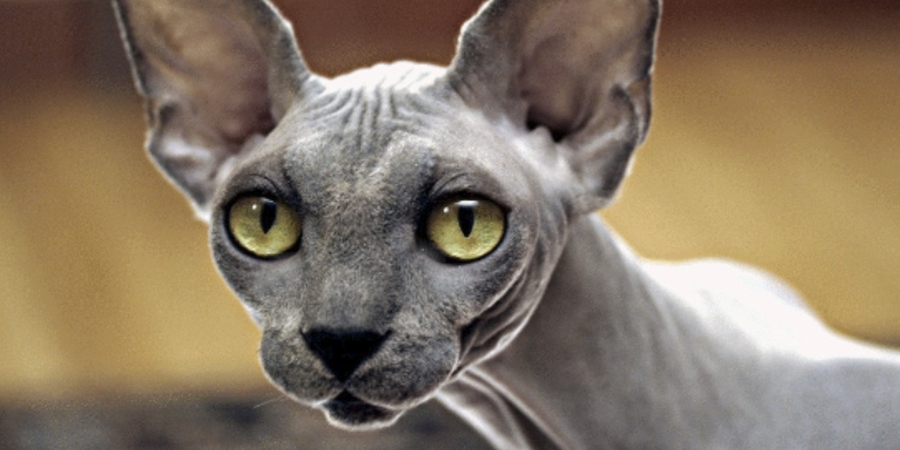 Hairless cats were born in different parts of the world, and in the 1960s, purposeful breeding work began on the Canadian Sphynx breed. That is why several domestic shorthair cats began to give birth to hairless kittens.

In 1966, Canada became the birthplace of the new breed of hairless cats. A kitten was named Prun, and the first offspring, which was not strong in health, came from him, and the history of the breed could again end in failure.

But almost simultaneously, in Toronto and the United States, hairless kittens were born, and these were sent to the Netherlands to an experienced breeder. He crossed hairless kittens with the Devon Rex breed. So in the genotype, resistance appeared, and it was possible to declare the existence of the Canadian Sphynx breed.

Not all kittens were born with the needed skin type and characteristic folds, but more and more cats were born, and the probability of successful mating increased. In Russia, sphynxes became more popular, and they started to actively breed them in the1990s.

Canadian, Donskoy and Peterbald sphynxes are the main representatives of the hairless breed. Hairless cats from St. Petersburg are known as Peterbald. All types of these cats have their own characteristics.

The Canadian Sphynxes cannot be described without mentioning the incredible amount of folds of skin they have. The more they have, the higher the value the animal has. The Canadian breed has them in large quantities. There is so much bare skin that even if the animal is stretched to its full length, it will still have folds. 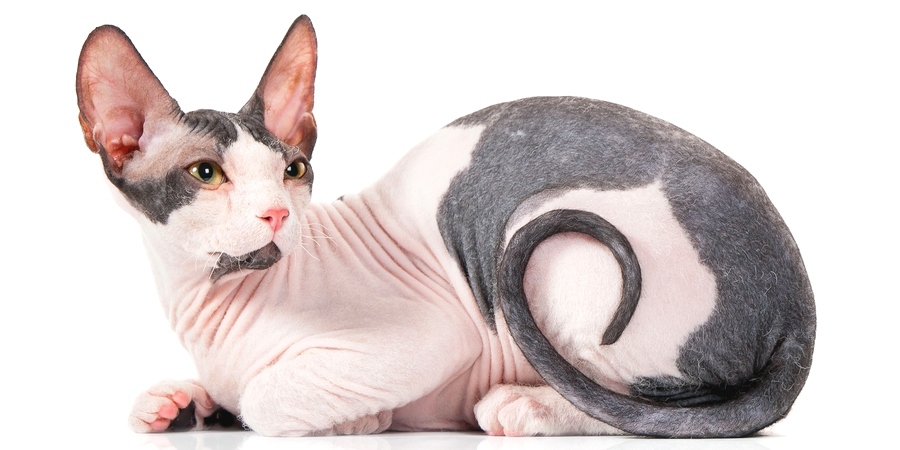 However, this cat is not completely hairless. The sphynxes skin is covered with a light fluff that feels like soft suede or peach skin. Short hair can be on paws, the scrotum, or external part of the ears. A puff of fur can sometimes appear at the end of the thin, refined, hairless tail.

For a long period of time, sphynxes could look into a person’s eyes without looking away. And it is difficult for the owner to take his eyes off the huge, slightly slanted, attentive eyes of their pet. Their expression feels as if the cat is ready to jump at any moment.

The Colors of the Canadian Sphynxes

The Canadian Sphynx can be in any color of various combinations. The color of the coat can be solid: blue, black, white, pink, mauve, red, chocolate or cream.

Bicolor – a combination of one of these colors and white color. Similar to Siamese cats (the tips of the paws, ears, nose and tail of a darker shade), tortoiseshell and tabby color.

The Character of the Canadian Sphynx

The character of the Canadian Sphynx is distinguished by aristocracy, delicacy, discipline and its good manners. Alien-like creatures will not attract your attention with loud meowing, even if they are very hungry. Cats will calmly look at their owners with bottomless eyes and intelligently wait until they are fed.

These cats are very active and easily get up to the highest places in the house. They are very affectionate and get attached to a person – they like to sit on their knees, cuddle their whole body and purr. It’s hard for them to be alone. 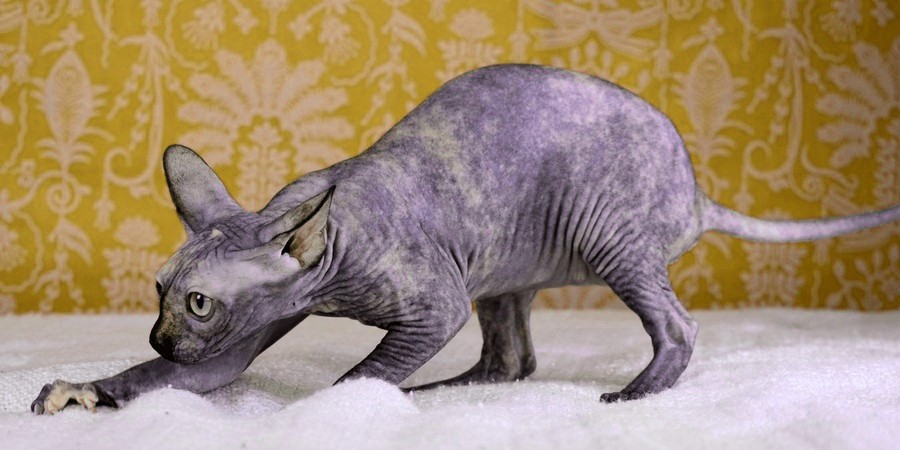 These animals are not fond of noisy children. Cats do not tolerate familiarity and prefer to move away if their independence is restrained. However, for a long period of time, they will endure while they are poked at and will never bite or scratch the child.

These hairless cats get along with other pets in the household. Birds and rodents can be quiet, and sphynxes are not interested in them as food because of it. Even with dogs, they get along and can sleep together. This breed is easy to fall in love with because of their tactfulness and friendliness to all living things.

How to Care for the Canadian Sphynx

Once the kitten has no fur and you don’t need to comb them, it may seem that they need minimum care, but that is not true.

Hairless cats profusely sweat. They have a large number of sweat glands that produce a discharge that does not look aesthetically pleasing. Cats must be wiped with a damp cloth or bathed; otherwise, the skin appears with dark spots. 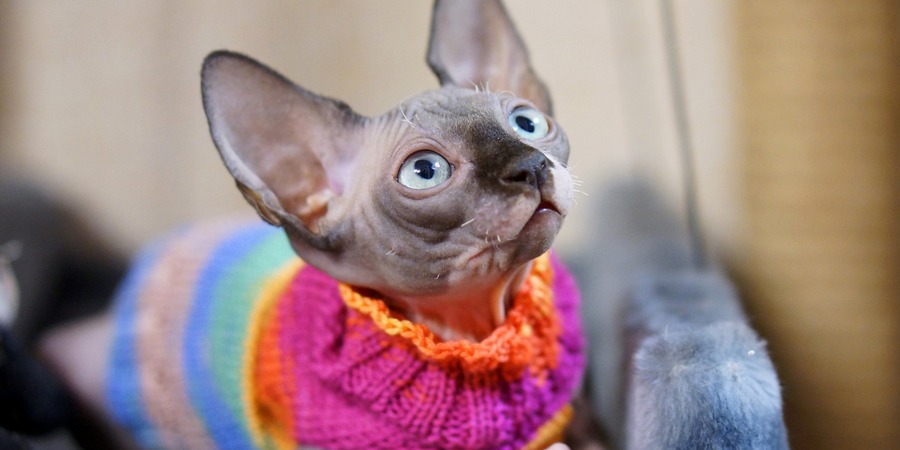 The seasons affect their condition. You need to make sure that the pet doesn’t overheat in the sun or catch a cold from drafts.
To care for the Canadian Sphynx, you have to maintain the optimal temperature and humidity at home. The cat’s skin will start to peel off from too dry air and can even form ulcers from it.

Hairless cats don’t have eyelashes and are prone to frequent illnesses, so they need to be cleaned from secretions. Brushing your cat’s teeth and cleaning their ears is mandatory care.

The Diet of the Canadian Sphynx

The Canadian Sphynx also has an increased appetite due to the increased heat exchange. Your pet will not be able to go without food for a long time and will agree to eat anything you offer. But do not feed the Sphynx with any type of food due to its weak immune system and the wide number of probable illnesses.

The diet should be balanced and include lean meat, offal, fish, vegetables. Whether you should include cereals, dairy products in the diet depend on the pet’s health. If you feed the cat with dry food, it must be an elite brand from a trusted manufacturer.

The Health of the Canadian Sphynx

The Canadian Sphynx was bred artificially, and when it was bred, breeders primarily paid attention to preserving the hairless gene. But along with the lack of hair, animals acquired a whole bunch of genetic and exotic diseases.

Due to the lack of fur, they have a hard time as their body temperature is increased, and their heart beats twice as fast as other cats.

Obesity is in first place among health problems for this breed.

Multiple illnesses and diseases cause great discomfort for the Canadian Sphynx, such as:

The most insidious disease for cats is osteoarthritis, as it is difficult to detect it in the early stages and also difficult to treat. 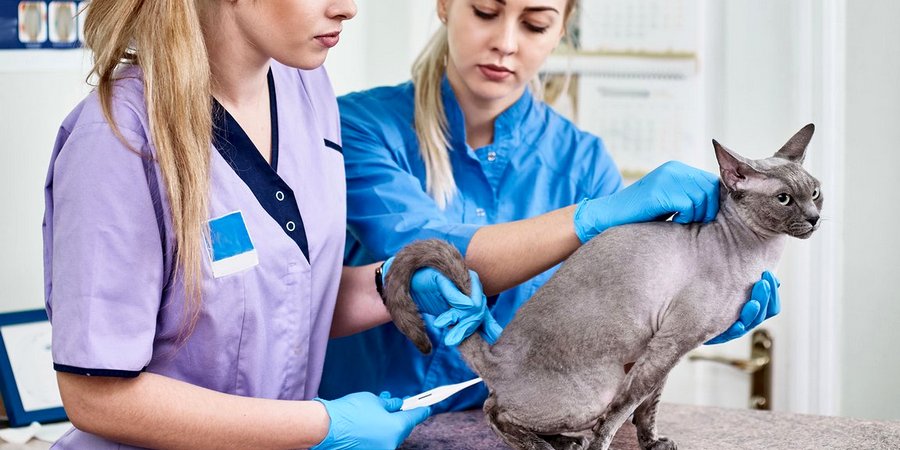 Prevention – the first thing you can do to help your pet. In adulthood, the immune system of the Canadian Sphynx strengthens, and it gets sick less often, but vaccinations, preferably inactivated vaccines, are necessary for kittens. It is hard to do injections on adult Sphynxes due to the fact that their skin is very dense.

Reproduction of the Canadian Sphynx

It is categorically not recommended to mate cats for reproduction purposes for a person without the appropriate education. Due to hereditary and genetic health problems, newborn kittens may be born with abnormalities or unviable.

Pregnancy and childbirth should also take place under the supervision of a specialist. The Sphynx heat lasts 5-8 days. Pregnant cats require additional attention and affection and can become aggressive.

The kitten is born with a small amount of fur. In the first weeks, the mother of the kittens constantly licks her children for cleanliness, good blood supply and organ function.

Animals can be castrated after the kitten has reached 10 months.

How Long do Canadian Sphynxes Live?

The average life expectancy of a Sphynx is 14 years. Some individuals manage to live up to 20 years.

With proper care and early detection of illnesses, its life expectancy can be significantly extended. A lot of it depends on the conditions in which the Sphynx lives.

How Much Does it Cost and How to Choose a Kitten

The Canadian Sphynx is a choice for many, and they aren’t bothered by the care they need nor the possible illnesses. Animal farms all around the world offer to choose different color Sphynxes.

Elf cat is a hairless cat with curled ears

Sphynх Cat Skincare: How to Care for a Hairless Cat