Home » Sphynx Care » Acne in Sphynx cats: what do the black dots on the tail tell you

Quite often, acne appears in cats too. For example, you may notice black dots on the tail of a Sphynx cat. Most often, black dots on the Sphynx cat’s tail indicates improper care of the animal, but they can also appear as a result of the development of various diseases in a male or a female cat. Acne can be different for cats: from cosmetic defects to pyoderma. The development of acne is affected by a number of factors, and the symptoms are only the tip of the iceberg of hidden problems associated with a cat’s health and care of it. Black dots on the Sphynx’s tail can appear for a variety of reasons, and only an experienced veterinarian can determine and find out if the animal needs special treatment. To prevent this from becoming a large problem, you should regularly check your pet for possible acne. 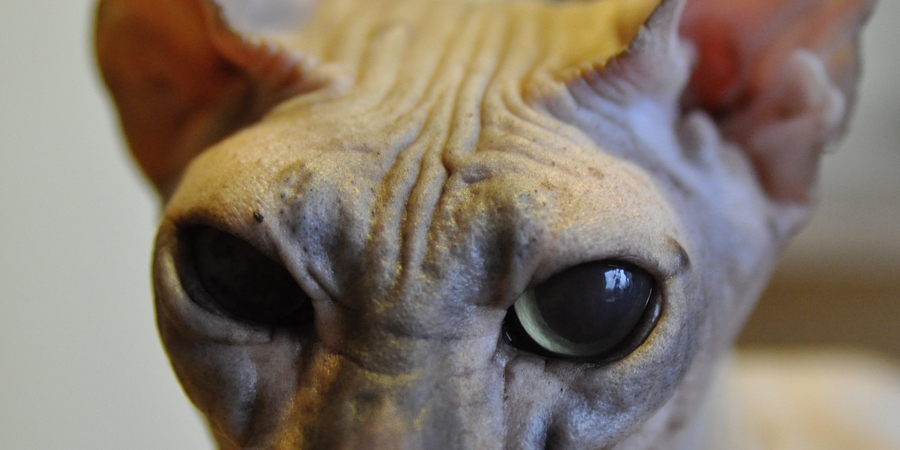 Acne for cats is similar to a human – a consequence of a blockage and then inflammation of the sebaceous glands and hair follicles. The owner usually notices rashes that are located in the chin area and (less often) the lower lip area.

Cats have a lot of sebaceous glands, and they are divided into two types:

In the appearance of acne, most often, the second type of sebaceous glands that are intended for marking the territory is involved. The chin, in this sense, is the most vulnerable for several reasons:

The main causes of acne

There can be many reasons why acne developed. The disease occurs in all cat breeds. It is noted that non-sterilized animals suffer somewhat more often, and male cats are more often affected than female cats. In a special risk group are hairless, Persian and Himalayan cats.

Factors leading to the development of this disease

The causes of acne are usually divided into external, related to the influence of environmental factors, and internal, provoked by changes in the body of the cat.

If the disease is caused by external factors, then the problem is resolved with its removal.

In other words, acne often signals that there are problems with the cat’s health.

Does cat acne pose a danger to people?

Cat acne itself does not pose a threat to a person’s health. But on the other hand, acne that has been caused by flea infestation or is connected to reduced immunity, trichophytosis, can be dangerous.

How does acne appear in cats?

The disease goes through several stages in its development, but this does not always happen. Spontaneous stabilization of the process at one of the stages is possible, and cases of self-healing are also possible. 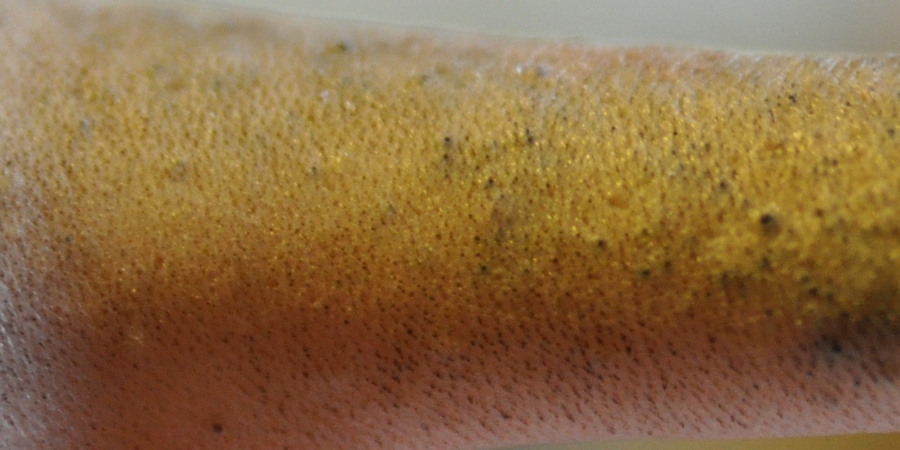 Stages of the disease

If the cat has not received treatment, then the severe course of the disease is characterized by the successive fusion of small foci of purulent inflammation into larger ones and the development of pyoderma (purulent skin infection), which is accompanied by:

When inflammation spreads from the follicle to the subcutaneous tissue, a furuncle is formed. At this stage, surgical assistance is often required, consisting of opening, sanitizing and draining the foci of purulent inflammation. The general health condition of the cat is severely affected. In ordinary cases, the consequences may be foci of alopecia (baldness) on the chin.

In Sphynx cats, the inclination to acne is inherited. Mostly hairless cats of blue, cream-blue and red colors are affected by this. Those individuals who have retained a delicate residual coat are less likely to get sick. Wide lesion zones are characteristic, occupying the maxillary space, muzzle, neck, back region along the spine with extension to the tail, as well as the abdomen. With the widespread occurrence of acne, hyperpigmentation of the skin can occur.

The most typical forms of acne for Sphynx cats are comedones and nodular-cystic acne.

The inflammatory component is weakly expressed. Comedones can be one or multiple. It is mainly located on the dorsal surface of the tail along the spine in the lumbosacral region and less often – on top of the cat’s head or ears. 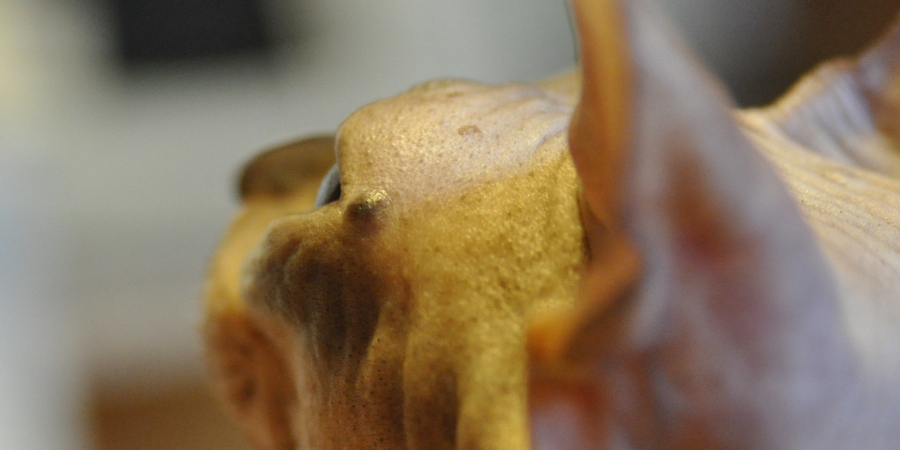 This form is characterized by the formation of deep infiltrates and cystic cavities containing pus-filled cavities — cysts that can join and open up to the surface of the skin through the formation of fistula passages. The illness takes a long time. Its favourite localization for this type of lesion is along the spine to the tail. Often in these places, a typical “shell” is formed, consisting of overlays of dead and keratinized epithelium and purulent exudate. After healing, persistent cicatricial changes remain.

Persian and Himalayan cats, in addition to having acne, there is a rare disease that they can have – idiopathic facial dermatitis. It appears around the age of six months, up to a year and a half. The cause of this illness is unknown and is manifested in the abundant release of black waxy plaque by the sebaceous glands, while the hair partially falls out. The chin and around the eyes are the most affected places; deposits accumulate in the skin folds on the muzzle, as well as in the external auditory canal, causing bilateral otitis media.

Accumulations of dark sebaceous glands on the cat’s face, partial loss of hair in the affected area are symptoms of idiopathic facial dermatitis

This illness practically almost can’t be cured. Fortunately, if you are taking hygienic care measures and restrain secondary infection, it is only a cosmetic problem and does not affect the quality of thecat’s life.

An experienced owner will notice acne if they see the typical signs manifesting on the cat’s chin or lower lip:

You need to visit a veterinarian if you see obvious signs of illness for the following reasons:

It is important to understand that in most cases, acne is a symptom, and it will persist or recur until the underlying cause is eliminated.

Differential diagnosis is performed with the following illness:

In cases where it is difficult to establish the diagnosis, a study of the affected skin is performed by relying only on clinical symptoms. Under the microscope, this illness is characterized by:

How to treat the disease at home

In the early stages of acne, home therapy is really helpful. 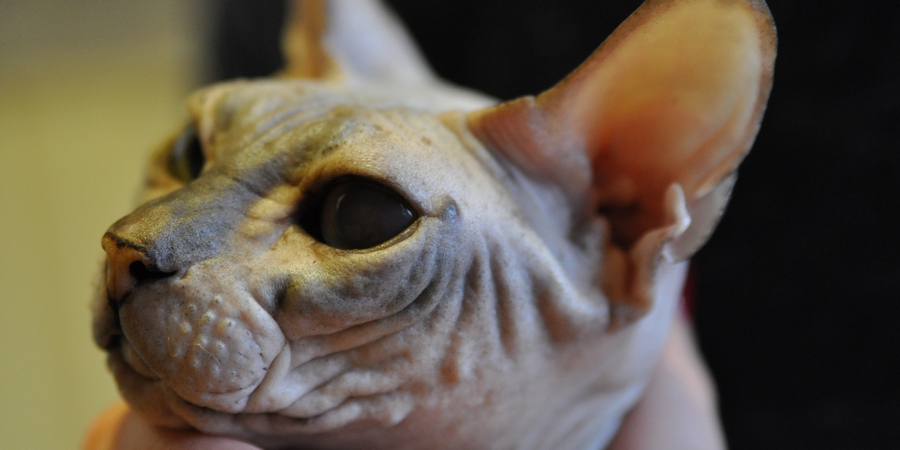 Before consulting a veterinarian, the pet owner needs to monitor the cleanliness of the affected areas, and treat it 2-3 times a day with a swab dipped in an aqueous solution of chlorhexidine.

What you mustn’t do

What you should avoid when you notice the first signs of acne:

Treatment depends on the stage of the disease

Acne therapy depends on the stage of the disease:

If the acne returns after treatment, then an individual therapy plan is developed by a veterinarian and requires treatment procedures about twice a week.

In mild cases, it is possible to use natural antiseptics that come from plants. If the cat is allergic, please, do not do this. If there are signs of folliculitis (inflammation of comedones), you should switch to ready-made dosage forms of drugs.

The content of plant-based medicinal components, unlike pharmaceutical products, are not standardized. Nature is brilliant, but in this case, it is more reliable to rely on the accuracy of the pharmacist-technologist.

To wipe areas with comedones use:

Rules for carrying out medical procedures

Medical procedures are carried out for a pet in a certain manner:

If the cat starts to scratch the affected area, apply a collar.

In cases where the applied product causes irritation to the cat’s skin, stop using it. If the inflammation continues and the affected area expands, replace the medicine with another. If the inflammation continues, it is necessary to make sure that also trichophytosis does not appear with it. In every case, the cat needs to be looked at by a veterinarian if the medicine needs to be changed.

Care of the cat

Following some of the recommendations below will help you deal with the issues more efficiently: 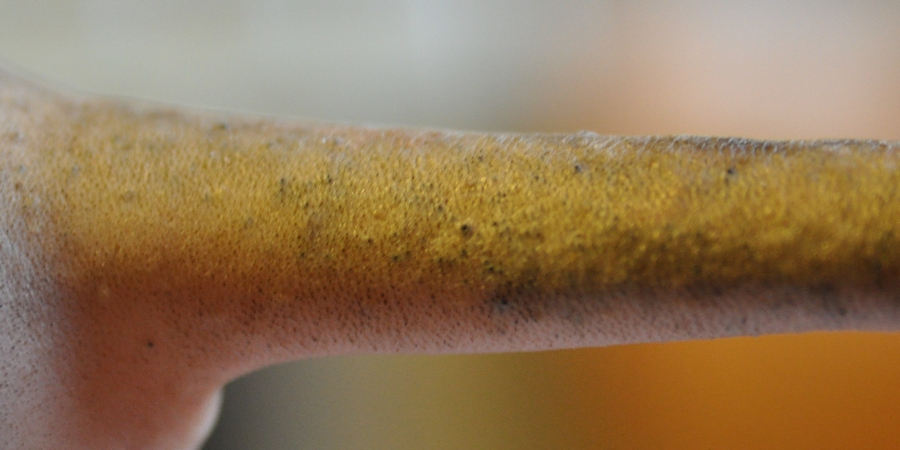 Pregnant cats are contraindicated with systemic antibacterial agents, as well as the use of transretinoic acid. The use of home-made ointments with antibiotics is also undesirable since it is not known if the substance will enter the bloodstream and can have a negative impact on the fetus. It should be limited to hygienic procedures and local therapy with antiseptics. Fortunately, both systemic antibiotics and retinoids are used infrequently in the treatment of acne.

To prevent a weakened kitten’s immunity associated with the development of intestinal dysbiosis when prescribing a systemic antibiotic, care and local treatment should be used first.

To prevent untreated advanced illnesses that require systemic medications, pregnant cats and kittens should be looked after more carefully.

How to prevent the development of the disease

To prevent acne for your pet, you need:

Sphynх Cat Skincare: How to Care for a Hairless Cat

Ukrainian Levkoy is an exotic pet